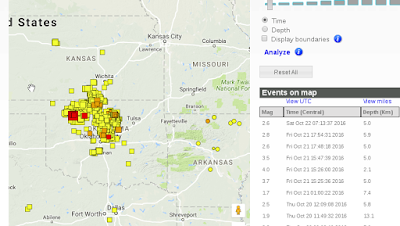 One reason that I closed my Earthquakes g+ collection was that OK had totally shut down, and I had nothing to say.  :)  Now, it's cruising again with one m4 a day, and one m5 a week.  I had been worried about the pause, since I saw no reason for it, the oil and gas fracking seemed to be at their normal levels for the year.  I do expect a pause when Winter hits because the gas frack business in Penn. shuts down.  This year, however, Texas is going full blast on Permian oil fracking.

This rate should give us a 6 once a month.  Perhaps the 7 has to wait until next year.  Nobody will care about a 6 unless it is a shallow thrust near the city.  I had joked that the pause was a conspiracy to make Grumpy Trumpy look good until the election.
Posted by Harold Asmis at 10:28 AM