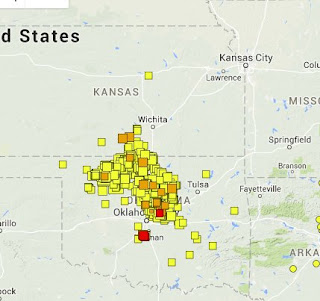 They love the 'frontier' references down there.  And now they have opened up a new earthquake zone just SW of OK City.  This fact has been sealed with an M3.4 intensity 5, which indicates a shallow thrust.  There have also been some deep earthquakes all at the same spot.  A new earthquake zone means only one thing, they got shipments of fresh-water fracking waste.  They might have been injecting 'produced' water there before, or these could be new holes.  Whatever it is, we'll never find out because all that is secret.  Anyway OK maintains a good rate of 3 3's a day, and the other day it looked like the rate doubled.  We'll see if that is the case.

ps.  Whoa!  Just as I was writing this from my sweltering cottage, they got a deep m4.2 which has been reported as over 5 by many seismometers.  I'll call it a 5 and it confirms that the rate has doubled.  I had predicted this with the huge jump in natgas futures.

ps2.  So that 5 was a strike-slip, directivity to the NE, followed immediately by a deeper one, strike-slip to the NE again.  Can't seem to get a world rating for this one, so I don't know if it was more of a 5 or not.

ps3.  lots of big earthquakes.  Should have a 6 soon, but if it is deep normal, nobody will care.
Posted by Harold Asmis at 5:57 PM