I do this once in a while for new people to my 'Earthquakes' g+ collection. 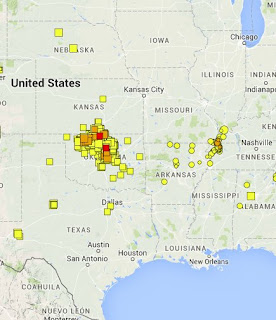 Up here in Canada, we have the Precambrian rock emerging, and we have studied it a lot.  It plunges to be below all the sediments of the US.  There hasn't been one speck of study for the 'basement' in the US, yet that is where the earthquakes are.  The pc isn't one huge slab of solid rock, but has a complex structure, namely long NE trending 'megathrusts'.  This is how the pc formed, by continental collisions, and now these faults are the focus for earthquakes.

At the pc level, the whole continent is under very high horizontal stress, due to plate tectonic motions, and mainly by sinking into a cold zone.  In fact, the continent is at the 'limiting' stress, and excess stress has been relieved by motion along the megathrusts.  All the Paleozoic rock above these features is fractured.

All would be calm and peaceful, if they left the rock alone.  Unfortunately, this is not the case, either naturally, or man-made.  The New Madrid zone was created by a natural seep of river water.  It took thousands of years, and ended up with 3 huge earthquakes in 1811-12.

Now they are 'emulating' the same thing in Oklahoma with injection, at a thousand times faster than New Madrid.  The current rate is 3-4 M3's a day, with one m4 once a week.  Another m5 should come in a few months.  I predict that they will stop injection with an m6 shallow thrust either at Cushing or the city.  At any time, it could all skip to an M7.

The mechanism is 'stress corrosion' of the deep quartz due to surface water injection.  They have been injecting deep salt water for years without an effect.  This water comes from fracking, either for natural gas or oil.

ps. After writing this, I saw that the Atlantic wants to outdo the New Yorker in earthquake scare stories.  This is the New Madrid, think of Oklahoma instead.