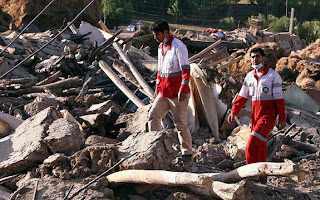 So, I'm swimming against the tide here, since the formal notes indicate strike-slip.  But this the land of very intense shallow earthquakes, and I have called them the 'Fist of God', or a hammer-strike earthquakes.  Also there were two earthquakes quite close together.

What happens is that there is a blind thrust which defines a nice valley.  People love this valley, and build nice rubble houses.  Every 500 years or so, it lets go (after all it has to keep up the valley).  The propagation velocity goes sonic, perhaps super-sonic, but well over the normal shear velocity.

We've never measured on the top of one of these things, but it can lift giant rocks into the air.  I estimate over 200 cm/s PGV (I never mention evil PGA!).  The bizarre nature of these earthquakes can easily fool distant seismometers.  If you had GPS you would see the valley go down, and the hills go up.  The nature of super-shear also means that the damage is extremely severe for the magnitude.