So, this area has been hit by earthquakes.  It is also a huge oil producer since the beginning.

The first oil boom came to the Prague community in 1915 with the discovery of the Paden field. The little neighboring town was flourishing under typical early day oil boom conditions. In anticipation of expanded activities, excitement ran high in Prague; even the Prague News became a daily.(48)


From 1915 to 1923 there was a great deal of leasing of desirable land by oil companies around Prague, but no new fields were discovered. In 1923 Prague had its second oil boom, with the discovery of oil on the Leader Ranch, fifteen miles north of Prague. The ranch was owned by M. Blumenthal, owner of Prague's leading drygoods store.(49)


The big Wewoka oil field came in 1923. This field is forty miles from Prague but it was connected the Stroud field by a highway that ran through Prague and caused the town to share in the activity.(50)


The development of the Earlsbourough oil field reached its peak in 1926 and was the next boom to affect the little town of Prague. Earlsbourough is thirty miles from Prague, but again the traffic from the booming field came through Prague bringing its golden harvest.(51)


The Cromwell-Seminole Oil fields were brought in 1927. As a result, one of the largest fields in the state was approximately twenty miles straight south of Prague. Again, the oil fever ran high in the little town, but still no oil was discovered in the immediate vicinity of Prague.(52)


The location of the Stroud-Key West oil field twenty miles to the north, Paden, nine miles to the east, Crowmwell-Seminole pool, twenty miles south, and Willsetta, ten miles to the west, gives Prague an excellent location for trade with the booming fields without experiencing the worst features of an oil boom.(53)

The last oil development to affect Prague vitally came in 1931 during the depression days and eased the impact of unemployment on this community. This field is the closest of all the fields to Prague as it lies just outside the southern city limits. Thus Prague has benefited greatly from oil but has never had a first class boom of its own.(54) 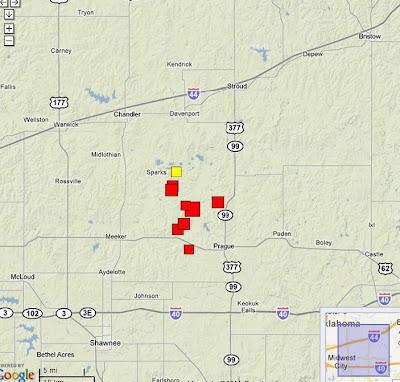 Now, why all the commotion right now?  Somebody is probably doing deep injection, but we'll see if it can develop into a full mechanism.