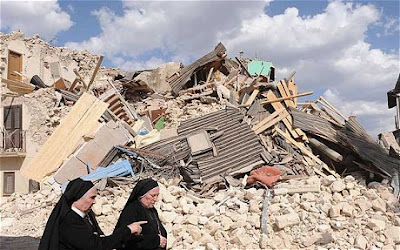 Nice article.  Lots of places in the world are 'sitting on a bomb' at 1 in 1000 odds.  Look at Toronto!  It is the nature of officials to ignore this.  And probably, you'll have a thousand earthquake clusters before one is  significant.  Still, there seems to be mixed opinions on this trial.

I think in reality it happened this way:  The scientists hemmed and hawed, using countless qualifications, so that they were not understandable.   The public officials then stated that there was nothing to worry about, and that all those earthquakes 'were relieving the stress', or some such babble.  The scientists, in their ivory tower, did nothing.  Like Christchurch, and a zillion other places, nobody bothered to mention everybody was in a seismic death trap, since everybody knew, but chose to ignore it.  As with Toronto, it's not really a scientific issue.
Posted by Harold Asmis at 9:07 AM