Brine water, a byproduct of oil drilling and hydraulic-fracturing for natural gas, is flushed underground.
"There's definitely a coincidence," said Jeffrey Dick, geology department chairman at Youngstown State University. "But whether or not there's a link, nobody has enough data quite yet."
Heidi Hetzel-Evans, a spokeswoman for the Ohio Department of Natural Resources, said the agency stood by regulations allowing the well operations. The agency has "not seen any evidence that shows a correlation between localized seismic activity and deep-injection well disposal," she said. 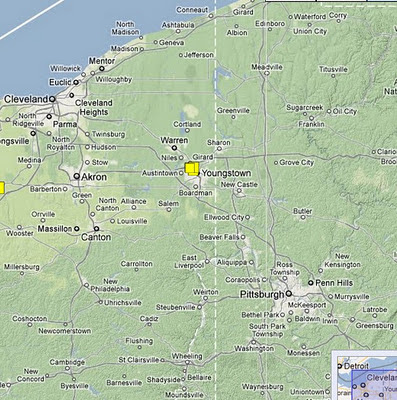 Yeah!  We start Arkansas all over again!  This is a prime fault zone, the megathrust that defines the Hamilton Fault Zone, and zooms all the way down to the big stuff.  I don't think we have the seismic resolution to define a mechanism, but, like Arkansas, they should start with a NW thrust zone, and then bloom to a large NE strike-slip.  Although in this area, like Hamilton, you can survive with a NE mixed fault mechanism.

Now, the fun in watching this will be to see how big the earthquakes can get before they capitulate by turning off the well.