Here's the diagram I was looking for. It's from this paper. I had worked a lot on rock squeeze in the early days. 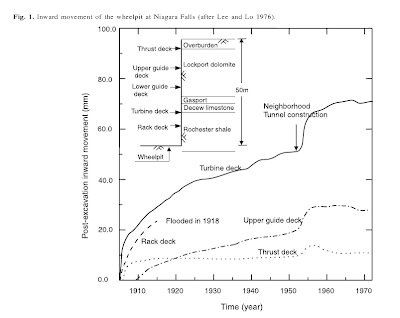 It shows the famous Niagara wheel pit. Note that the squeeze has gone on forever, and never stops. The pictures from this were amazing, with all the concrete totally shattered. Nothing can stop rock squeeze once it starts.

On the other hand, we can have a decent tunnel, such as Darlington. Here, the convergence stabilizes. 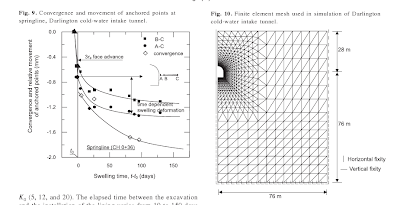 Now, do you see a resemblance anywhere to some tunnel we know that will eventually cost billions?

Actually, I was thinking, that if this was honestly approached initially, as a difficult tunneling job, it would never have been approved. It was sold as a 'slam dunk', 'low hanging fruit', type of thing. They had to have a TBM to make it sexy. Without these types of people, we would never have had such fun! Sort of like Palin.

As well, we have 3 other difficult jobs that are being sold by the same guys, and the same methods: Bruce C swamp, Deep Waste in Swiss Cheese, and Darlington Reactor on a Postage Stamp. All of these are 'slam dunks'.
Posted by Harold Asmis at 5:17 PM