The Story of El

I am really, really getting fish-deprived. I've got to update my fishing licence and actually catch something! I just had my formal-formal last day at the office, handed in my Blackberry, and all my badges. Since I am hereditary-depressive, I've got to watch these things and down some calmy-pills. That's why I won't get really involved in the mud-fest of the DGT (even though there's lots of money!). That's depressing!!

Today we have a nice fishing story of the youngest of the 3 sisters of Ontario, the beautiful El. Like all her sisters, she started life as a fiery island arc, blasting away the primitive life, as well as giving vital nutrients. She was born in the proto-proto-Atlantic, but one day she woke up to see the looming ugly old continent before her.

Just like a Toronto street racer and a concrete divider, she smashed up against the continent, and her life as a fun-loving island arc was over. Her weak remains were squeezed like toothpaste up into a giant mountain range. As with all things, she was ground down by time, covered by the poop of marine creatures, and fell out of all living memory.

That is, until the intrepid bargain-basement seismic squad found proof of her existence under Lake Ontario. The paper is "Deep structure beneath Lake Ontario: crustal scale Grenville subdivision", and I don't know where the heck this one is hiding behind the paywall. 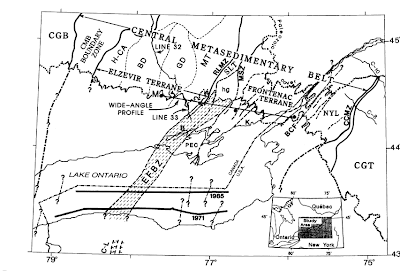 There's El, called the ugly name of EFBZ in this figure. Naturally, El is much prettier in cross-section. Note the beautiful straight lines of her footwall, and the sensuous curves of her hanging wall! Even all mooshed up, El is a thing of beauty!

Now the sad thing about El is that she never gets any credit. She mucks up the Paleozoic and caused earthquakes, just like her middle sister CM, but the limestone people say its all them! Down in the States, they blame big earthquakes on the Clarendon-Linden fault system, which is all kettle-scum!

Poor El. Here is a seismic section showing what merry havoc she is wreaking on the flat-lying billiard tables. 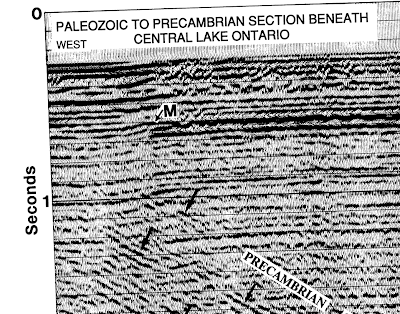 You certainly have a way with words. Is there any chance of getting coloured charts and a legend of the symbols?

That would probably require some effort...