In case anybody was asking, I had a great weekend fishing. I caught some large bass on a very tiny hook, and they spit it out when I raised them. For those serious about fishing, never raise the fish out of the water, always slip a net underneath.

I was asked to clarify my geology ramblings over the last few posts. I hesitate to do this because of the implications, but what the hey! I express this in the form of a Wikipedia article, but I could never submit this, since it contains original thought (a big no-no!), and references which cannot be easily verified (behind the paywall). If this had been a real Wiki article, I would have extensively wikified it with links.

The megathrust fault geology of Ontario

There are two types of megathrusts in this world: a downward megathrust such as the big subduction zone near Vancouver, and an upward megathrust that is involved in mountain building.

Before 1.1 billion years ago, most of southern Ontario did not exist. It was a big deep ocean, with a bottom of cold oceanic crust. At that time, the cold oceanic crust began to sink, and the ocean started to converge, creating many subduction zones. Much like modern-day Japan, these subduction zones created volcanic island arcs, but still the ocean converged, and continents were starting to collide, much like Indian and Asia.

The first island arc complex collided with the cold core of North America (Archean). Huge megathrusts formed, creating a linear mountain range, as seen in the Rockies today. The heat and pressure, melded the rock together into a solid mass (metamorphism), and there was sufficient time before the next island arc collided, creating weak 'cold joints' between each episode.

These cold-joint megathrusts are clearly visible in deep seismic reflection data. The leading one is the Grenville Front (GF) fault, the middle one is the Central Metasedimentary (CM) fault, and the third is the Elzevir (EL) fault. 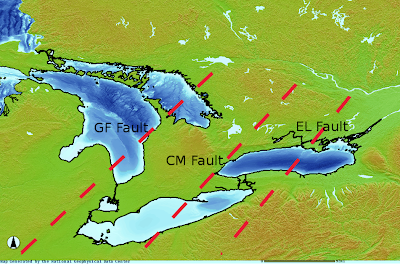 Note the perfect parallelism, as with most mountain ranges. Soon the oceanic convergence stopped, and the mountain ranges cooled down, eroded, and sunk. There may have been some backsliding collapse, which further weakened the main megathrusts. The basement rock was almost ground flat, but there remained very significant topography (Grand Canyon scale), at the megathrusts.

Eventually, the basement rock cooled so much that it went below sea level. Shallow seas made extensive deposits, as the basement deflated. The sediments made flat layers for the most part, except over the megathrusts, where they had some difficulty. The continued sedimentation solidified the rock, but the rock over the weak megathrusts continued to fracture and slide, forming faults.

At some point in the past, we Ontario residents were lucky that the deep Moho once again heated up, lifting Ontario into the position we now enjoy. This probably happened during the last mass convergence of the continents, just before the Atlantic separation. This uplift once again disturbed the megathrusts, and weakened the Paleozoic rock above.

Of course, we cannot forget the last few million years of ice sheets, and damage they did to the already fractured rock. The basement rock sunk under the ice load, and is still uplifting in parts, but the general trend is for the rock to be sinking again over the last 50 million years.

Now, each one of these megathrusts has the following generic cross-section: 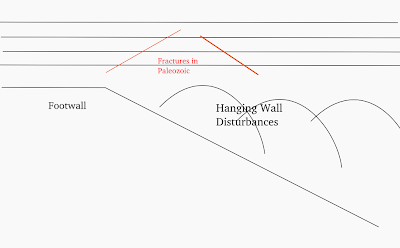 This can be seen on the available seismic sections, except for the GF fault, which only barely appears on the Lake Erie lines.

The first map shows the maximum disturbance zones, which can be easily traced by long linears in shorelines, and rock topography. Along these lines lie most of our earthquake zones, oil and gas zones, and zones of smashed Palezoic rock. In between these lines are the the zones of solid rock, and high horizontal stresses.

These fault zones have severe implications on the seismic hazard of nuclear facilities located on them, as well as deep geological waste repositories. More effort should be undertaken to properly map these megathrusts, mainly by processing the available seismic data in Lake Huron.
Posted by Harold Asmis at 3:43 PM

Thanks for posting! It's slowly beginning to make sense, and I've linked to it so that others might enjoy it.

I never want to catch anything, just sit there and enjoy thinking about the fish I might catch.

The weather has turned, the smog alert has been lifted, and it's nice out again! Almost time to come back from the cottage?

I'm at the cottage, working on a crap dial-up line. I'm just up with the dog, and no time for fishing. I'm busy botching up some plumbing. Amazing how many times those newly soldered pipes burst, and I have to do it all over again! Oh well, down to just a few minor seeps which can be fixed with lots of goop on them. Darn tootin' cold! Had to start a fire overnight.