I'm enjoying my post-work sabbatical. Unfortunately, I couldn't get to the dock this weekend because of teenager commitments, my daughter is off to Prague to represent Ontario in water polo! Yeah Ontario!

One advantage of being old is that you have gathered a lot of old stuff that somehow is missed by the modern Google data vacuum. I have an obscure copy of "A geological study of the Massena-Cornwall earthquake of Sept. 5, 1944, and its bearing on the proposed St. Lawrence River project", by Charles P. Berkey, Geologist, New York, April 10, 1945.

This was one of the more fascinating books of my career, when I first read it. My in-laws were living in Cornwall at that time, so I also talked to them about it. For emergency planning purposes, I considered this the perfect model for the likely Toronto earthquake (following the numbers!). It's magnitude is uncertain (especially on the countless magnitude scales!), but is somewhere between 5.5 and 6.0. Again, nobody in soundbite-land will acknowledge the hazard, but we are as likely to experience this type of earthquake as most anywhere else in eastern North America (ENA).

"The earthquake began with a violent shock accompanied by terrifying noises, including sounds and loud rumblings, at 12:38 am Sept. 5, 1944. This was followed by a second shock later in the same morning, with many aftershocks and tremors of minor character distributed through the following days." "According to these observers, the estimate of a million dollars damage for each of the larger villages, is probably not too high. It is made up almost entirely of small items affecting perhaps 90% of buildings in the town. ... practically every one of the 3081 homes and buildings was damaged, although only a few to a serious extent." 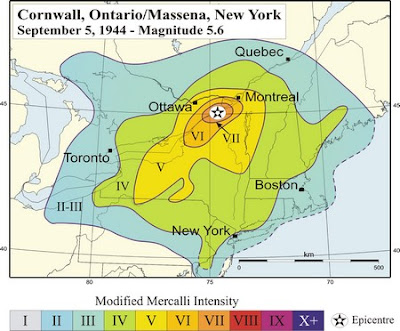 Of course, all the damage was on the soft soils by the river, which consists mostly of the notorious Leda Clay. There were numerous liquefaction events. Up on the hard tills, the earthquake was hardly noticed (from my in-laws!). From my experience, I estimate that the Peak Ground Velocity (PGV) was about 500 mm/sec on the soft junk, and about 5 mm/sec on the hard tills and rock, an amplification factor of about 100 times. 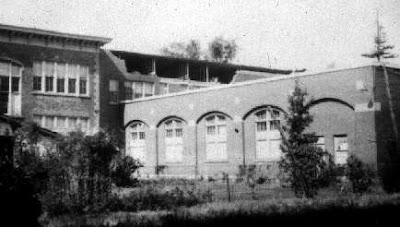 If we transpose this earthquake to modern Hamilton (the most likely location), we would probably get about 0.1 to 1 billion dollars in damage and economic disruption. I would suggest that the teeniest bit of special planning would reduce this by 10's of millions of dollars. The numbers show the odds at about 1% chance per year, so this gives a present value of about a million per year, which we should be spending.
Posted by Harold Asmis at 10:56 AM