With all my canoe tripping, the thing I like most doing is gliding through a swamp. There's something about these fantastic carbon sinks that goes back into ancient geology. You dip the paddle, and glorious methane bubbles up. The biggest fish are also in the swamp, the really large largemouth squeeze into impossibly shallow water, just to get a chance at those millions of frogs!

When I first entered the workforce, I got hold of this almost magical (like Harry Potter!) map. It was an old topo sheet, but it showed the old gas seeps, and farmer wells in the area. You know that there were no big companies drilling here. Most likely, farmers noticed the killed vegetation, and the bubbles, and sunk in a pipe to light the farm. I scanned part of the map here. 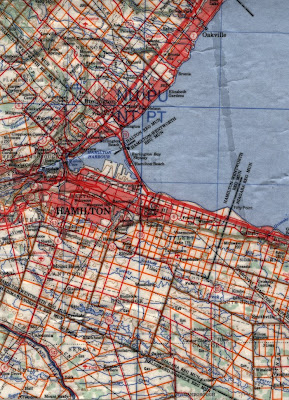 You can see (Click on it!) all the gas wells around Binbrook, the heart of darkness (for major seismicity) in this area. When gas bubbles up, it means that fluids are moving deep in the earth, and this is significant for earthquakes. You don't see this gas towards Niagara Falls. In fact, we blasted two huge tunnels (and another on the way!) without encountering any gas. In the lake, the geophysics shows plenty of gas 'pockmarks' where the gas has blasted the soft 'loonshit'. No gas in Toronto, where this megafault hanging wall runs through the city, mainly because the sediments get thin, and not too much in the way of gas-generating oily shale. We did encounter some gas in a borehole at the old Lakeview generating station, and it nearly blew somebody's head off when he snapped off the cap!

The presence or absence of gas and oil is an indication of the general openness of the rock (permeability). You're not getting any gas through my magnificent rock up on the north shore of the lake! Another story will tell my musings on the causes and how deep fluid flow is the ultimate driving force, projecting a fairly significant earthquake threat (seismic hazard ) to the whole Golden Horseshoe.
Posted by Harold Asmis at 9:00 PM

Interesting stuff. Fitting title too, as you may or may not know the term "Swamp Gas" is the phase coined by government agencies (U.S. anyway) to explain away any unexplained phenomenon: ex. UFOs, haints, fireballs, general spookiness and contradictions of physics we can't afford to spend money on to research any further. So good call, intended or not.
Unfortunately, people just can't seem to stop themselves from topping their last feat of civil engineering, so hopefully your lake farts will be 'creepers' for a few more years.

Actually, I hooked in here looking for links for a bioluminescence program I am writing up, and ran into your stinkin swamp gas. Got any weird glowings or deep freshwater monster sturgeon stories for me???

dude. this is very cool. surfed in here while googling swamp creatures for short fiction research. turns out i'm sitting on a fault line ... ?!! far out.