A while ago, I purchased a really cheap fishfinder from Costco. I know there's a million fancy ones, but I just wanted depth, and some indication of fish. I was quite excited when it reported the depth off the dock, and then fish! I took it on a canoe ride, and it reported lots of fish! However, I was beginning to get suspicious....

At a section of clear water, where I could clearly see there were no fish, those darn fishies kept appearing on the screen! I had to come to the conclusion that my new instrument was a bit enthusiastic on the fish-reporting thing. It still showed depth, but only to about 60 feet.

I used to cruise with much bigger fishfinders, that didn't detect fish, but went right through the sediments, and bounced back an image. As well, there was side-scan sonar that bounced the sound waves to the side, and came up with something that looked like an airphoto of the bottom. Now, these boats were not all luxury cruise ships, they were downright decrepit, but serviceable, and we jammed a lot of equipment on them. 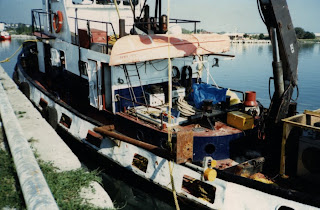 Vessel used on Lake Ontario
We used an even uglier boat on the North Channel, which was one of my most favourite summers. 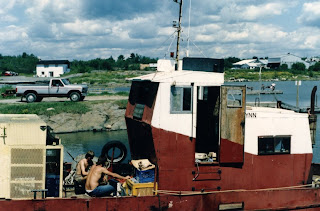 They still had commercial fishing there, and they used large, unmarked nets (shudder, shudder....).

Here is a wonderful side-scan mosaic, which is composed of hundreds of individual rolls of paper (in those days, they photographed on a huge floor, now it is all digital). 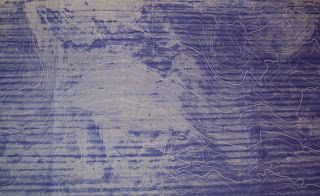 Of course, you really can't see all the neat stuff I can see, but there's a large sediment bay in the middle, with nice smooth silt. At the lower right, there's some rock showing, and right in the middle there are the little spots from dredge dumping.

One thing we were really looking for was the rock, which has a unique sonic signature. Here's a picture from a submersible, showing the type of rock we found. 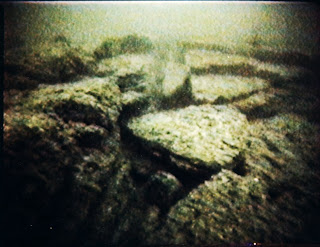 I think this came from a remote submersible, but we saw the same sort of thing from the navy 3-man submersible that is on my page.
Posted by Harold Asmis at 2:51 PM