I don't always just play with the fish off the dock. Once a summer, we make a massive effort to go to a small lake with a lot of cooking-size largemouth. These are gutted with the skin on, oiled, and put on the BBQ. Yummy, but it fills my desire for fish, for the season.

Nevertheless, as all good fishing lake are, this one is a slog to get to. Last year, we took the extended family, and started catching our quota. We had them on a string in shallow water, and then had our picnic. One of the kids noticed that two huge bass had quietly come up to our string. I swear, these were the Grandma and Grandpa of the lake! They could swallow our cooking fish whole, and I'm sure they regularly do!

Their mouths were 3 inches across! Just for fun I dangled my flatfish lure in front of one. He snapped at it, mashed it in his enormous jaws for a while, and spat it out! We didn't have hooks big enough to penetrate any part of those scaly jaws, and my line would be thread to these guys.

They eventually tired of our show and went away. Recalling the story, I thought of other 'dinosaur' projects we have done in Ontario. Not many people know we were once building a giant oil plant near Wesleyville. It was started in the early 80's, and was to burn heavy fuel oil, which was cheap at the time. The oil was to be stored in huge underground caverns.

These were exciting times for a young geo-person. I visited the site and took pictures. 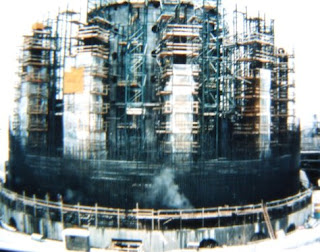 This was the start of the massive chimney, which is now a major eyesore (good for boat navigation, though). 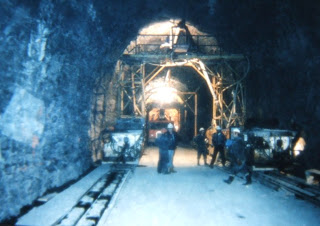 These caverns were huge, and cut into the deep limestone. This rock was incredibly tight, and dusty dry, even though it was deeper than the lake. You could store the worst nuclear waste in here, and in 10,000 years it would probably penetrate an inch into the rock. 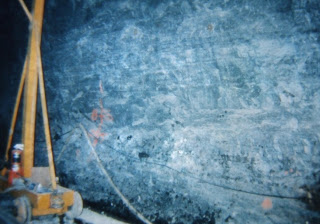 A close-up shot of the rock. Absolutely magnificent!

Needless to say, the price of oil skyrocketed (duh!) and the project was abandoned. The tunnels were allowed to fill up with rainwater. The site is currently used as a warehouse, and everybody can see the beautiful chimney!
Posted by Harold Asmis at 4:04 PM