Stress is generally bad for you. I worked for 28 years in a giant techno-bureaucracy, and I've seen my share of stress. If you think NASA and the CDC are technological treasures, then you might not know what I mean.

Now that I'm retired, I'm hoping that I can cut down my dose of anti-depressants. There is nothing that can reduce the stress more than a little bit of fishing off the dock (only if you are not expecting to catch anything!).

Stress, however, in rocks is generally a good thing. It holds up mountain ranges, moves continents, and keeps the rock tight and impermeable. Rock without any stress is usually just a pile of rubble. Rock stress is basically the forces on an element of buried rock, divided by the area. I steal a bit from the wiki article I started on fault mechanics. On the wiki, you can never say you wrote an article, but you can say you started it. 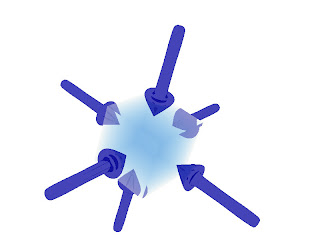 In the early 80's we were quite amazed that we had high horizontal stresses in Southern Ontario. My mentor-manager Dr. C.F. Lee (now of the University of Hong Kong) and I, wrote papers on this. The high stresses caused problems for rock cuts and tunnels which were immediately cast with concrete, where the rock would squeeze in and virtually destroy the concrete.

We did a lot of stress measurements. Most were of the overcoring variety (which is a bit dull), but we finally worked up to a deep hole, over 300 m in depth! This borehole went right through the upper Paleozoics (limestones), and right into the heart of the Precambrian! This shows our big ugly drill rig. The decorative 'crackle' is a result of trying to digitize 35 mm slides. 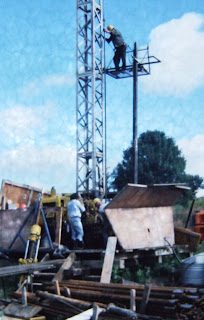 We used the hydrofracturing technique and got some interesting results. That's Dr. Lee standing, and Dr. Haimson bending over some results. 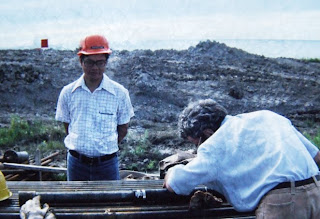 After the pressurizing of the water, and cracking the rock, Dr. Haimson made a rubber impression of the borehole to see the direction of the crack, which gave an idea of where the maximum stress was coming from. 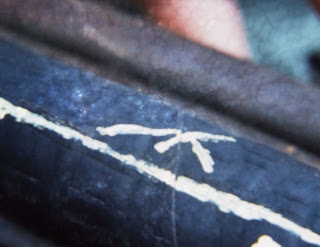 It turns out we had a very strong NE direction and a very high horizontal stress. In fact, the stresses were beyond the technique which has a limitation on the maximum ratio between the strong and weak horizontal stresses. The real mystery came later, as I wondered why in Ontario we can have such high stresses in some areas, and absolutely crap rock in others.
Posted by Harold Asmis at 5:11 PM