I've mentioned The Cliff, and it's glacially scoured surface, but the glaciers did more than make pretty lakes for fishing. I used to do a lot of computer analysis for a deep geological nuclear waste repository, and I became amazed at how deep glacial damage can go.

It's not just that they pile up a great weight of ice, but they do it unevenly, building up shear stress. As well, they can pack a lot of water pressure, since most temperate glaciers have a high-pressure melted zone underneath them.

What I found is that I would expect sub-horizontal open fracture zones extending to about a kilometer in depth, provided the surface was clean rock. This is exactly what they found when they were drilling and doing some excavation. It makes the Great North somewhat difficult for a waste repository. Below this fracture zone, in the Manitoba test site, they found rock at extremely high stress, so much so that it was almost impossible to excavate without the rock blowing up in your face!

Here is a picture of some possible glacial rock damage (maybe, maybe not, but a nice picture nevertheless!) 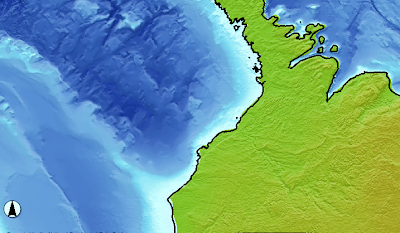 NOAA
This damage is done over clean, permeable rock. As you get down to Toronto, a totally different type of damage is done. My analysis showed that if you cut off the water injection, there was almost no damage to the rock. This was shown with our deep holes drilled along the lake. I was not expecting, however, another type of significant damage.

We were happily running nuclear plants in the mid-90's when all of a sudden, the newspaper headlines were filled with "Big Fault under Pickering". Naturally, it caught our attention. The tricksy Rouge River had cut right through a fault and exposed it for all to see.

I had a look at it, and sure enough, it looked like a classic San Andreas. And this was on top of my lovely rock which I had said was not disturbed because of all the wonderful stress it held. I was stumped, and our feet were held to the fire!

Meanwhile, I've added some pictures to my post about Thursday's storm.