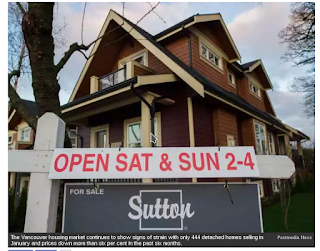 Vancouver started it by looking into shell companies and laundry money.  Toronto stuck its thumbs into its eye sockets.  Then they hit with that 15% foreigner tax.  But really, that shouldn't have done anything, since ownership can be so easily hidden in Canada (Snow washing).  No smart laundry-man was going to pay that.

At the time, it was probably easier to move operations to Toronto with numbered Ontario companies.  I know that one minute buyers were lining up and fighting each other.  Then happytrump got elected, and the bond market lost a trillion dollars.  I think that's real money, even to the bag men.  :)

A massive attack on Canada was predicted with an eventual 65 cent dollar.  But trumpypants and Canada go up and down like a toilet seat.  Still, that was the final straw.  And of course, CBC had to add superfluous nails to the coffin with the whole money laundry investigation, even though nobody was listening.

So, for next week's housing figures look to see January sales plunge to the nether regions.  Our dauntless realtors will say it's just supply and prices are holding.  Yeah!  But not the point.  As with Vancouver, you get 6 months or more of no sales, and then prices start to tip.  A classic death spiral.  The BankCan can't do nothin'.  It shot its load the last time.

So, don't say anything, just watch and wait.  Some young people I meet while dog walking are happy for this, but he just got a job doing mortgages.....

ps.  early hype is pure spin.  Sales up over last January, so was December.  Must wait for the full figures.