Bermuda Triangle on the Move

Of course, the Bermuda Triangle has as much physics as climate science, but we live in a non-physics world. 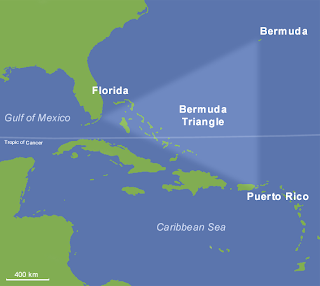 Various attempts have been made to glue on some science, such as giant gas bubbles, but let's just say it's magic.

So, a while ago we had a very weird earthquake in the BT.  I thought it was evidence of ridge-push, but now we see it has the very same thrust mechanism as this new M6.4  I call this more than happenstance, Watson.

Plotting the last 30 days, shows us our weird earthquake. 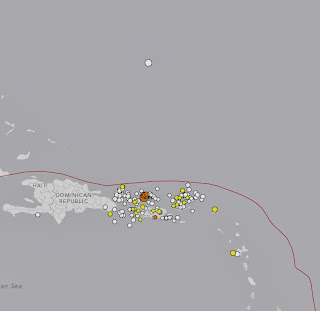 Ignore the fact that there is this monstrous cluster, it is just an artifact of the USGS being forced to put a seismic array there, and nowhere else.  Now a EW thrust is not what we expect here, since this should be totally strike-slip, since the Caribbean 'thumb' is prodding and pushing down the Atlantic.

I conclude that the only way that we could get twin thrusts here is that the fault is starting to move in a strike-slip manner, and this is the 'crunching' that you expect at the ends.  I would not fall off my chair if we had an M8 or larger along this zone in the near future.  This 'prediction' can join my long list of failures.  :)  Since I have a poor memory, I am never afraid to issue new ones!