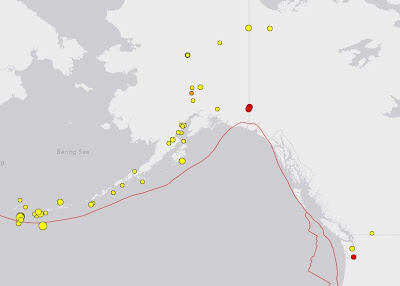 In the larger scheme of things, this is a very small earthquake for the region, but it is in my favourite spot right now, so I'll make a big deal of it.  That big SE trending plate boundary is a strike-slip (transform) fault that has had 2 M7+ earthquakes spaced 2 years apart, marching towards the armpit.  So I have stated that I expect an M7+ earthquake right there, by the end of the year, give or take a factor of 10.  In doing so, I am extrapolating a straight line from 2 points, in an area of extreme variability, just like those nice climate folks.

Now, we can do this, as long as we have no money involved!  The nice thing is that it doesn't really affect the seismic hazard and risk much.  The whole place is under the shadow of an M9, and basically you are doomed if you are on swamp, and totally laughing if you are on rock.  (In the next 10 years).  It doesn't matter where you are exactly.
Posted by Harold Asmis at 6:03 PM