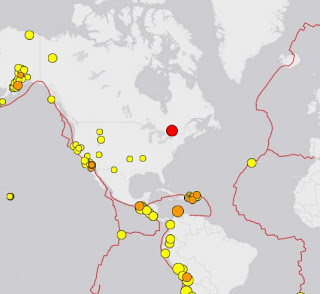 The USGS is calling it an M5 earthquake.

They have it more into Quebec, but the Canadians were calling Ontario and an M4.8.  I felt it upstairs as a low rumble that rattled the knick-knack case.  Obviously, I should have that secured!  If you felt this strongly in Toronto, you are on a swamp and should get earthquake insurance.  I'm sure people were rattled up in Ottawa.  Not much in the news.

Earthquakes in this area come as no surprise, the M5's are common.  It is an area with lots of water, and severe glacial uplift strains.  Within the main zone, I feel that the earthquakes are constrained to M5 because of the type of rock, and massive random fracturing.  Along the Ottawa River, however, there is a major failed rift zone, and all these M5's build up the chance for an M6 or 7 here.

Canada now puts it in Quebec with an M5.1.

Cancel that!  Still an M5 with an M4 aftershock.  I still think the M5 is overrated until I hear stories of office buildings being evacuated.  :)

Still weird with the USGS now calling a single M4.4