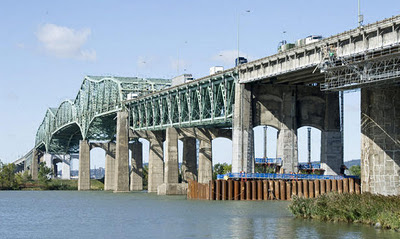 This bridge is such a seismic death trap!  Can you imagine it in an earthquake?  I'll love when they take it down and see if it is made of wallpaper paste instead of concrete.  My old friend was a bridge/tunnel engineer in Montreal, during the time of mass-corruption.  He was too far removed to see if the concrete was subbed, but the later mafia-esque takeover of English engineering firms is quite a story!

Of course the new bridge will as pure as the driven snow......

But really, only an earthquake can expose construction corruption.