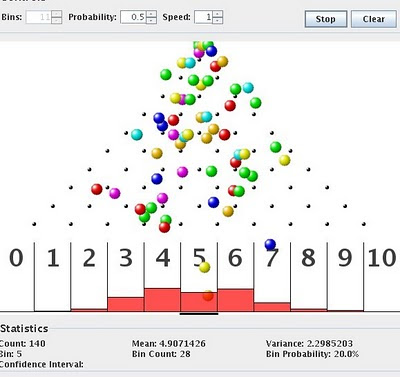 On this site you can play a game of Plinko. Watch the nice falling balls. You can watch a long time before one ball plinks all the way along the outer edge and falls into #10. I read a great book on the use of Plinko in business, and quality control. If you plot a time graph of cost overruns or some other thing, and most observation are lying in a nice narrow band, you can easily expect an excursion of 3 times the mean every once in a while. That's the #10!
That's because most error processes, methane bursts, wind gusts, and earthquakes, are the results of many little probabilities. Most earthquakes just burst away, but every once in a while, everything lines up and Plinko!
The important thing in business is to recognize that you have a binomial distribution, and then be able to handle the major excursions. The worst thing to do is to only react to #10, and then try to steer the process. This will result in over-steering. Try to explain that to your boss! Bureaucracies become hardened by reacting to the excursions, and everything becomes fractal, which makes things worse.
The actual shape of the curve depends on the general fractal-ness of the problem, and the true limits. Earthquakes are limited to around M9.something, because a single plate arc can only be a certain number of thousands of kilometres long. 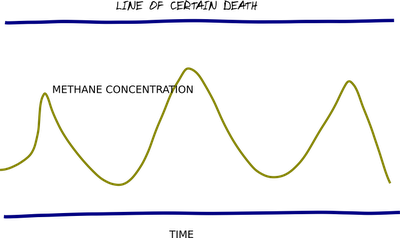 Now, if Big Coal Boss (who resembles some bosses I have known) had ever measured anything, he might have noted methane bursts in the fan exhaust. If this were Plinko'd, then we would certainly expect a burst to cross the 'Certain Death' line.
Such is the fun of fractal distributions, and plinko probabilities!
ps. I finally got that damn Java plugin working on my 64 bit Debian Linux! Turns out there's a bug and they're not going to fix it, because it's so easy to run a single command. Oh yeah! Took me a long time to find that stupid command.
Posted by Harold Asmis at 5:50 PM

Methane outbursts generate acoustic emission (harmonic tremor-like) events prior to a rockburst. It is relatively simple to monitor for these and shut the mine down when a threshold event rate is reached. I know this has been done in the UK.