That was a fine sabbatical!  I must admit that February usually gets me down with its gloom, but this year, thanks to my exhalations of carbon, we have enjoyed a sunny, snowless winter.  I found out that I have 2 avid readers!  All of my other 200 hits a day must be spam. 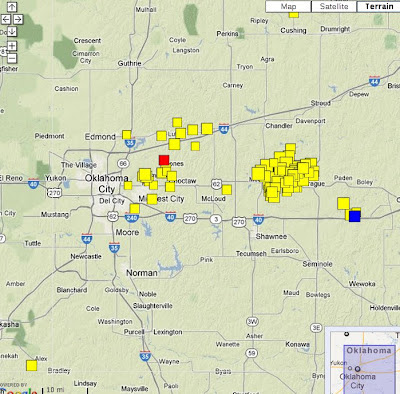 I focus now on Oklahoma, which has provide the only earthquake interest this week.  This is a fine example of 'damn the torpedoes' with regard to injection.  The ultimate, of course, is West Texas, where they have a giant injection pincushion, and they live happily with regular M6's.

Now, if the US would spend a buck, they could do a seismic reflection line across the whole megathrust zone.  They would get a picture like we got going over Ontario.  I've resurrected my Art of Illusion graphics, and came up with this. 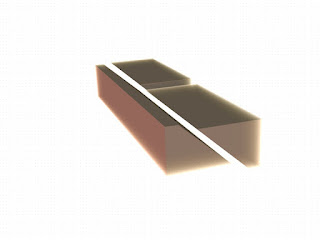 This is so neat!  You can easily animate the fault sections and make a movie.  Perhaps I'll do it one day.  This shows a megathrust with an adjustment wrench fault.  The actual dip of the fault is much shallower.  This whole area is underlain by strips of these things, making a washboard road.  My movie will show how they came together and what happened after.

So, the point is that if you were injecting along the whole line, which they probably are, you'd expect to get a nice line of seismicity, but this doesn't happen.  The seismicity comes in evenly spaced 'pearls'.  What is happening?  I think it's these adjustment wrench faults, which are generated to accommodate curvature in the footwalls.

So the real question with Ok, is how big can the earthquakes get?  A series of M6's is relatively easy, because the fault zone is only 3 km, and there is a good chance of finding surface uniformity with that type of scale.  For real fun we want to get up to an M7 which needs 30 km, and this is rare to find, and is only in the large zones such as New Madrid and Toronto.  But large zones have grown up from small ones, and so it is more challenging to find a small zone that has the potential to grow.

Now Ok, had a very clean M6 zone, much like Virginia, but they are injecting like a madman.  What do we expect next - another M6 or something bigger?  Now I don't think the seismic monitoring is up to snuff, but it looks like we have a large fault zone, with the top being the city, the middle being that nice M6 zone, and new earthquake activity at depth.  As these earthquakes come together, they start to 'even out' a potential M7 zone.  I'm not too sure, since I really think larger quakes need a conjugate fault system.  So maybe an M6.5!