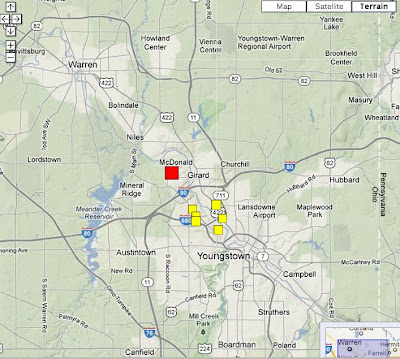 Wow, I had just barely issued my eulogy for Ohio earthquakes, and down comes this M4.0!  Talk about timing!  I think they must be connected to the reservoir now, or another injection site.  If it becomes conjugate faulting, as with Arkansas, then right now they are activating the thrust portion.  I'm surprised they haven't started the strike-slip to the NE.  Maybe that's the next quake!

In other words, I would be surprised to see earthquakes line up to the NW forever.  Could be the influence of the reservoir, but after this M4, I 'predict' an M4.5 starting along the NE line.  That would make me happy, not because of the earthquake, but because, then, all would be right with the mechanics.  :)

Minor brick damage, depth is now 5 km.  There were several other injection wells in the vicinity and these have been shut down.  Ohio has 170+ injection wells, and they claim they never triggered an earthquake, but we know better!  :)
Posted by Harold Asmis at 4:21 PM