I had to do one for Japan!


You won't believe it (I didn't) but this part of Japan that ruptured is the North American Plate, down from Alaska. 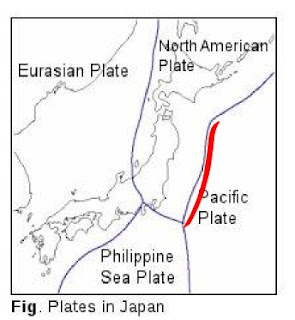 The earthquake ruptured the big red area.  They usually stop at the crooked sections, and at significant junctions.

So the lower section of Japan has a totally different subduction zone, and this is what will affect Tokyo eventually.

These earthquakes usually happen far out, so the shaking isn't that bad, and also they tend to rupture somewhat slower.  But when they go, they flap a big piece of crust, and that's what shlooshes out, sort of like holding water in a pizza pan.

People have always expected this type of earthquake, but the interior is subject to super-shear thrust earthquakes (M7), which produce a very high PGV.  This got another nuclear plant in Japan, and is probably what hit Christchurch.  You should never assume that the tiny sliver of continental crust is stable....
Posted by Harold Asmis at 2:37 PM

Hm, isn't that the Okhotsk Plate there...?

Maybe my source is wrong. It's still a continental sliver, and these guys always treat it like a stable craton. You got another map?

I know there were different opinions if this was a plate or if this place only belongs to the North American Plate. I think now most would agree that it's not a part of the NAP.

Seno & Sakurai, 1996 came up early with that:
ftp://ftp.ifm-geomar.de/users/dhindle/Fundamental_Concepts_in_Geodynamics/Articles/seno-1996.pdf

For long others said it isn't...

Stop being so mean to Pluto! Its not its fault that its small!

Hey, I love Pluto, but it failed its entrance exam to the Planet Class.