New Zealand Earthquake - The Pacific Rim is Not a Craton 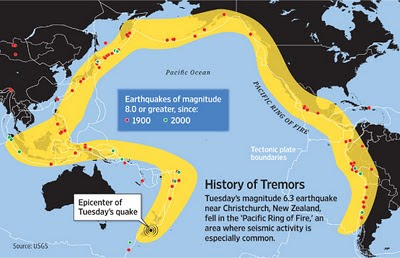 "One of the myths we hold in this country is that there's a single fault, but in reality there's a swathe about 200 kilometers wide where there are lots of faults that are potentially active," he said.


"We know there's an active fault running just off the coast there, and Dunedin is a city of late 19th-century masonry buildings that are very dangerous," he said. "No one in New Zealand should neglect the lessons of these earthquakes. They're the biggest wake-up call we've had."

I had hoped that New Zealand would actually be the stable place that the Clueless Swiss seem to think it is, and it wouldn't come up again.  I get nothing but grief when I report on it, since I believe that the people have been poorly served by those who should know better.  I really hope it is all over, and not as I suspect.
Posted by Harold Asmis at 7:49 AM

Today is as yesterday was, and so will tomorrow be - until something happens.

Lets build on a floodplain and hurricane-ravaged coasts !

And all our insurance premiums subsidise this.

Нow to search people under the rubble of concrete when will be discharged battery on theirs mobile phones?

The only effective way of detecting people under the rubble - it's infrared camera of a military helicopter.

Quality infrared cameras mounted also on fighters, but the possibility of detection of small objects is limited by the speed of aircraft.

Оnly amphibious military hovercraft can travel on the destroyed roads and deliver food and medicines and to evacuate large groups of people.

Рike riddle: that from this list will be used in New Zealand?

Sniffer dogs are the best for rubble searching. Extracting them may require brave tunnelers, or heavy equipment. Standard military trucks are good for damaged roads, but broken bridges are tough.