As we have seen, the ground motions were fairly ordinary.  We did not have the huge variations we see with Eastern North America.  The soil here is sandy and uniform.  I believe the measured PGV's truly reflect the input on the buildings.

What is the purpose of a seismic building code?  I always thought building codes were designed to protect the poor independent engineers from greedy owners.  If the owner said 'Use wallpaper paste!", the engineer could say "That's against code.", and be backed up by professional associations, and inspections.  The first codes sprang to life in 1933, since it was observed that buildings which were designed to resist 10%g lateral, did quite well in earthquakes.  This was equivalent to tilting the building by about 6 degrees.  All building codes eventually incorporate some lateral coefficient in a static sense.  This has, unfortunately, tied the code to PGA (peak ground acceleration), which is the big mistake of the ages.  Another problem is that the engineers now work under the direct lash of the owner.

When has a new building code failed?  A building code is said to have failed when the modern buildings do worse than the old ones.  A profound failure is when those buildings collapse in a killing manner.

What do we expect from codes?  I expect that codes will produce a minimum ruggedness in terms of PGV.  Thus, I demand (as a tech-purist) that there should be no damage up to 50 cm/s and no collapse up to 100 cm/s.   That's standard.  If you pour in more money in rich areas by major faults, then you can up it by 10 or 20 percent. Now, New Zealand was ridiculously fragile at 20 cm/s, but they soaked the Clueless Swiss.  Bank towers are rugged, and condos are fragile, as we shall now see.

As a digression:  Speaking of bank towers and condos, I was lucky to live and work in downtown Toronto for some number of years.  I saw the bank towers go up, massive, huge foundations.  The buildings were trimmed in real gold.  I knew that they were earthquake-proof!  Then I saw the condos - thin flimsy walls, with no shear resistance.  I thought:  Are you kidding me?  Lately, I've seen everything go up like this, and I just wonder....

I'm just concentrating on Santiago, since it was exposed to 40 cm/s and should not have experienced any damage.  Yet the place is peppered with cheap condos, just like any you would see in Vancouver or Toronto.  Know what did them in?  Their insatiable demand for underground parking space!  The whole foundation for these buildings was a stack of cards. 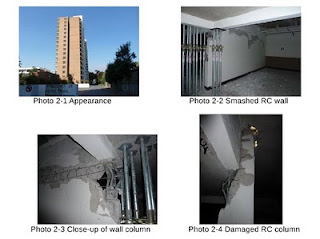 There's a happy building.  These towers are now tilted!

These condos are very trendy, I've seen them on Blue Clay in Boston!

No damage to the type of buildings you would expect damage.

Bank buildings have no damage.

I just extracted a small subset from the paper, which is somewhat Japanese-confused, but golden.  It is fair to say that if a tower starts to lean at 40 cm/s, it's going over at 70 cm/s at ground zero, which is what happened.

Well, what does this mean?  If you are a condo owner in Burlington or Vancouver, QUAKE IN YOUR BOOTS!  Actually, I can't really say anything 'concrete' or I will be sued for diminished value.  Luckily, we have the CLUELESS SWISS!  Your condo value doesn't go to dirt if you scam them like New Zealand.  Insure the whole market value of your asset, and double-insure the deductible.  Hopefully, you'll walk out of it happy.

Ok, now you have me freaked out. I own a condo on the 41st floor of 1 King West in Toronto. This building is EXTREMELY thin (50 feet wide and 600 feet tall!). They used concrete shear wall construction sitting on Georgian Bay shale like every other tower in Toronto. Is this thing in danger of tipping over in a quake? It appears to me the shear wall structure goes down to the bedrock so it is not siting on top of a transfer slab over parking. Will this help? How big a quake are the towers of Toronto built to withstand.

Oh by the way - stop picking on Burlington, You are giving me a complex :-)

I think rock in Toronto has a limit of 10 cm/s, even for a nasty one. That said, the condos in Chile were buggered at 40 cm/s. I don't know the lower limit. Certainly you'll be able to walk out alive at 10 cm/s, although the parking walls may be exploded, and the building tilted. :)
ps. Burlington gets 40 cm/s.

Actually, I live in a nice wood frame house nestled in the shadow of the escarpment in Burlington (hard red clay on top of queenston shale). I just spent a whack of money on the house so hopefully we don't get the big one too soon. I think you told me previously that my house will be ok but the drywall - not so much.

Im sorry to say if you were in Santiago you did not see a thing ! You should have gone to Concepcion and then you can talk about this stuff .

On the surface, Santiago was untouched, and that is the general public consensus. These condos are in Santiago. I am stuck here in my armchair, and can only comment on published papers, too bad...

Quick question for you. What frequency would we see the max velocity at. Would it be the 5 Hz we always see used for design? I am trying to get a handle on what the max ground displacement would be for an earthquake with 40 cm/s velocity. Without getting into all the calculus, It would seem to to be less than 4 cm (back and forth 10 time per second).

You're talking frequency in acceleration, which is crap. The velocity pulse here is below 1 Hz, and is only defined by PGV. The acceleration defines the pimples (roughness) on this relatively smooth pulse.

Conventional design would use the spectral accel. at 5 Hz. This earthquake invalidates that approach IMHO.

so what is the max ground displacement then?

I looked and can't actually find the full graphs of accel, vel, and displacement. I have earlier writings on this under seismic design. If I were to do my tv show, I would set up a full explicit model of a condo and let er rip!

I'm trying to get an understanding of the actual amplitude of the waves on the ground in a large earthquake.

For what it's worth I enjoy your Blog and check it pretty much everyday. I have an unhealthy fixation with all things earthquake!