Dilation and the Magnetic Pulse

We do know there was a magnetic pulse 15 minutes before the last OK m6.  The birds caught it, but nobody knows exactly how they do it.  It is thought they can 'see' the magnetic fields, so that looking North is different than looking South.

Now, deep in the earth we only have quartz and water to work with.  We can assume the water is conductive.  There are no magnets, so that a magnetic disturbance has to come from a sudden electrical current.  The hypothesis is that fault has pre-slip to fix its plane, the preslip goes to maximum dilation, and at that point an underground 'lightning bolt'  goes through the entire potential slip surface.  A few minutes later, the fault ruptures.

The whole idea of a signal is very controversial.  Not all earthquakes should have it, since many are complex, and jagged, and are really many earthquakes linked up.  I think we need a perfectly smooth fault surface, under tremendous stress, and that's what we have in the East.  And underground lightning bolt would also explain earthquake lights, etc.

I can explain up to the conductive channel, but the voltage difference is killing me.  You need tens of thousands of volts. 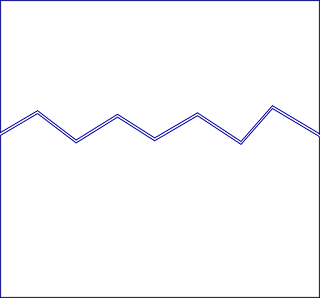 These are the two sides of the fault, using pure quartz.  When they inject, they start the slow slip. 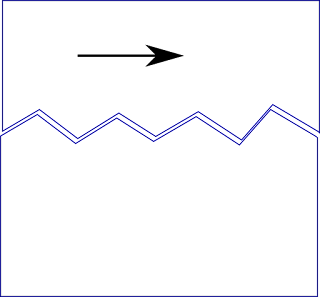 There is separation and the sides grind against each other, the quartz is compressed, which can produce voltage.  This has to go slowly, because water must infill the increasing gaps.  This is dilation.

After a lot of creaking and groaning, the fault is just before max dilation. 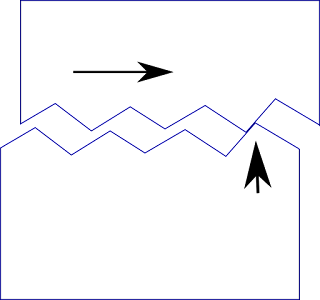 And this is what I think happens.  The big arrow points to the last sticking points.  They shear suddenly, releasing our lightning bolt.  But the fault doesn't rupture right away.  The volume has increased a little, and water needs to seep in (water is the great time delay)

For the main rupture, the fault hydroplanes.  That's why it is so powerful.

Can this give me my thousands of volts, and major amperage?  Who knows?  Like all my stuff, it's easy to test in the lab, but nobody will.  :(

ps. OMG I forgot that the piezoelectric effect is reversible, that an applied voltage deforms the crystal.  So, this could be a massive electron cascade.  Neat.
Posted by Harold Asmis at 4:15 PM