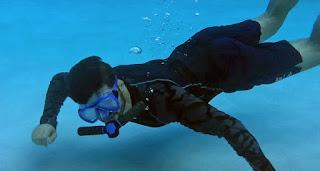 I blame it all on the warmists.  They were able to use semantics and philosophy to set aside the Scientific Method and create the new Consensus Science.  Now everybody has jumped on that bandwagon.  This thing has a tiny flashlight battery and claims to be Jedi Technology.

Also it helps that 3-d printing technology can come with a realistic plastic model.  No need for computer renders.  Who would believe that?  You need something real.  :)

A little physics tells us how much oxygen we need to breathe, and the volume of water that holds that amount of oxygen.  A little more physics tells us we can't breathe pure oxygen, it's like drinking pure ethanol.  In reality we would need gills the size of a whale shark's, and a heart-lung machine to put that oxygen directly into our blood-stream.

But I wouldn't want to spoil the dream.  Nobody listens to physics anyway.  Next I expect a genuine plastic perpetual motion machine.  Wouldn't that be neat?  :)

Wait wait!  I got one for crowd funding.

We have perfected cold fusion and turned it hot.  Our battery rams a single hydrogen molecule down a nano-funnel to highly compress it.  It then makes a loud bang as it fuses to helium.  No radiation detected at 3 metres!   Only $100.  Order yours now!  :)

ps.  whoops, whales don't have gills!  Intelligent brains need a huge amount of oxygen to think up scams like this.  That's why that niche in the ocean (smart hunter) can only be filled by mammals breathing air.  The size of the gills would so huge that a killer whale would eat you.  :)
Posted by Harold Asmis at 8:13 AM