Wow, it started early, fast and furious.  I was expecting another week or two, but maybe all that rain went down the open boreholes. 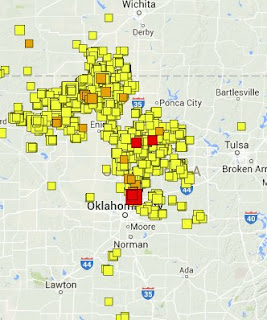 This parox will be on the lower section.  I'm calling it with this one, because the earthquake is following the mechanism, and although called an m4.3 here, it has been recorded as a M5.2, intensity 6.  This was a mixed mechanism, with shear-tension, but should act as the start of a zipper effect.  Within a week we should have a bunch of these along the shear zone, ending at Cushing.  As well, we should have some 'pure' thrusts aimed at the city.

**everything may be off a few days

***the accelerometers at Cushing should get to 20 cm/s with this parox.

ps.  If we had the hh deployed we could have seen EM pulses along the main faults. -- maybe.

ps2:  The neatest eastern earthquake video ever!  Note the kick and short duration.

ps3:  The worst damage yet, for the two zones.

ps4:  In an unexpected development, the usgs is saying the same thing, sort of, in a polite manner.