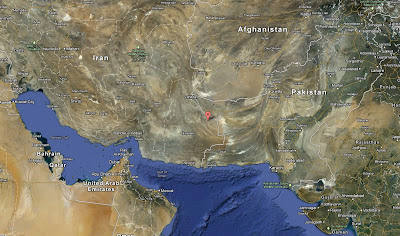 This is set in an area of pure compression, as the African Plate and Indian both jam up. 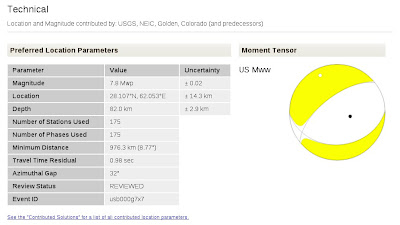 And therefore, we get a 'beachball' of pure compressional thrust.  Very shallow.  Most likely this was a 'super quake', similar to Kobe or Armenia.  That is when the fault rupture velocity exceeds the shear wave velocity, and essentially forms a shock wave of compression.  When that hits the surface, rocks fly in the air, and the PGV probably exceeds 2 m/s.  Nobody has been around to actually measure one of these things, so we don't know.

Update:  Pooey!  The beachball shows normal faulting.  Always get that wrong!  Forget the super-quake then, it's just average, which is enough to knock all the rubble houses down.

Update2:  I take that back.  A shallow thrust super-quake could totally screw up the beach!  I would have to double-check Armenia, if I wanted to do work.  :)

Update3:  Blah, deep extension earthquake, with no PGV.  This area is like the Sea of Japan, being wrenched apart by 2 plates with different vectors.
Posted by Harold Asmis at 8:14 AM