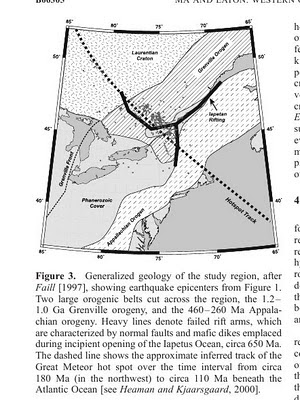 The geology up there is really interesting.  I always thought the most important thing was the failed rift.  This happened when there was an earlier opening of the Atlantic ancestors (Iapetus).  Remember that this ocean has opened and closed like a toilet seat over the billions of years.  But that was 650 million years ago, and this hotspot thing was more than 100 million years ago.  I really studied this stuff, but now I realize that there are a lot  of fractures, and none of this stuff matters. 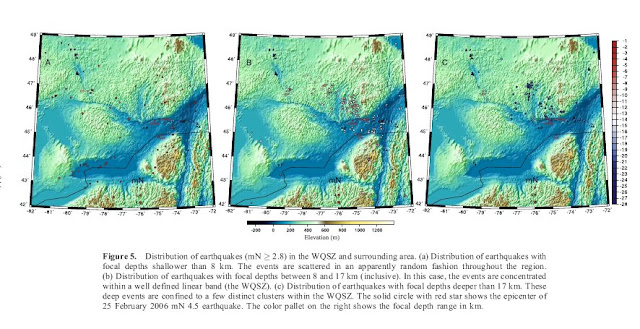 I just threw that in because it's cute!  I've come to realize (My Theory, and My Theory Alone) that the important thing is water, and/or a forcing function.  All the rock is fractured and on the verge of failure, due to major tectonic forces.  So if you inject shale-gas water, you get an earthquake (Yeah Indiana!).  In WQ there is a major forcing function of the last glacial bounce-back.  It's like a dimple you make with your thumb on a cheap plastic ball.  It takes a while to come out, and then there's that last pop.  WQ is undergoing the last pop!